That development of the city-owned space around the convention center received the City Council’s blessing Tuesday, May 7. It will mean long-lasting benefits by bringing visitors to larger conventions and technology workers who will then spend money in downtown and the rest of the city, Mayor Rusty Bailey said.

The project shows Riverside is “a world-class city” and was made possible by the Riverside Renaissance, $1.5 billion in investments to public facilities from 2006 to 2011, he said.

“This is exactly the reason the City Council and councils previously invested in the Riverside Renaissance,” Bailey said. 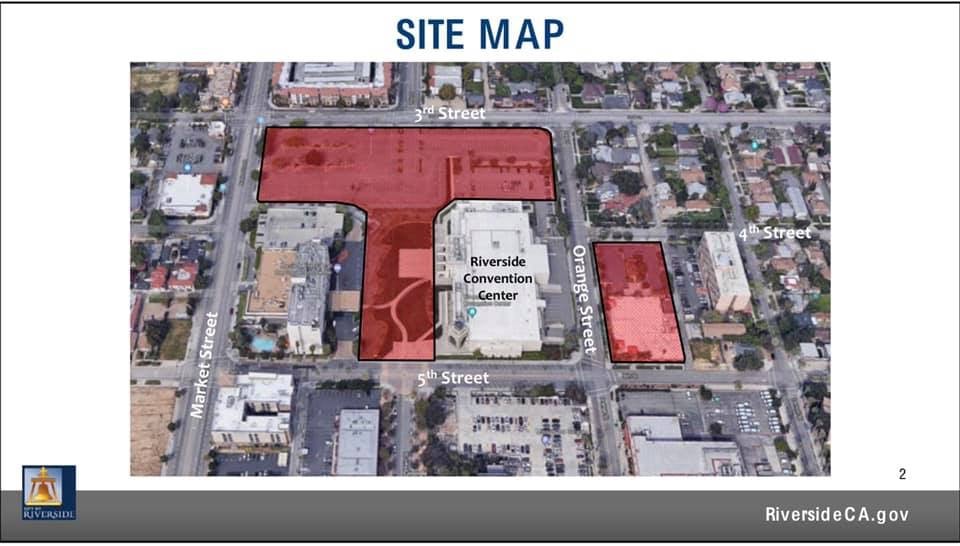 The project involves both private development and a public-private partnership.(Courtesy of the City of Riverside)
The development was one of two similar proposals that the City Council considered Tuesday for the parking lot next to the convention center, the landscape plaza in front of the center and the former Utilities Plaza Building.

After nearly four hours of discussion, the council voted 6-1 to approve the proposal from the Irvine-based Greens Group and Griffin|Swinerton instead of Riverside’s Sonnenblick, LLC.

Councilman Mike Soubirous voted no, saying he didn’t think estimates of how much revenue it would bring the city, particularly from parking fees, were realistic.

While city officials expect the project to earn the city money, Soubirous said he was concerned the city’s maintenance costs might exceed its revenues.

We are proud to acknowledge an award given to us by the County of Riverside Department of Environmental Health to congratulate us on receiving the 2017 Award of Recognition for outstanding food establishment performance.

This recognition is awarded to those food establishments who have maintained a score of 95% or above in each of the routine inspections for the 2017 calendar year, have maintained a current Environment Health Permit, and whose entire food handling staff have passed and maintained current Food Workers Certification.

This award symbolizes the hard work and efforts of both our Culinary and Banquets Team – we take pride in this award, and every inspection before by receiving an average of 98.5% since 2014.

After a ground-up $43 million renovation, the Riverside Convention Center is a cutting-edge facility that contains sustainable design features such as high efficiency LED lighting, occupant sensors for energy management, recycled materials, and drought-tolerant landscaping, including a garden used for fresh vegetables in the kitchen.

“We want to thank the Riverside Convention Center and Raincross Hospitality Corporation for taking the initiative to pursue greener practices in their facilities and operations,” says Riverside Mayor Rusty Bailey. “Sustainable and responsible environmental protection planning remains a top priority for Riverside as we focus on the next generation of strategies to drive green initiatives for our city.”

Currently, the City of Riverside offers this program to manufacturing, office/retail, auto shops, hotels and restaurants. Each business sector must complete an extensive checklist in order to become certified as a green business.

“They are the third business in the city to receive this designation,” says Girish Balachandran, Riverside Public Utilities General Manager. “We encourage more Riverside businesses to follow the Riverside Convention Center, OSI Group LLC and UTC Aerospace Systems in leading the effort to make Riverside greener and a more sustainable community.”

Certified businesses become part of a growing network of more than 3,600 companies that make up the California Green Business Network whose facilities are evaluated based on their efforts to improve resource efficiency through energy, pollution, waste, and employee safety.

Scott Megna, President of Raincross Hospitality Corporation and General Manager of the Riverside Convention Center, said he is not aware of any other convention center in the state that has received such a certification.

“The Riverside Convention Center prides itself in not only providing our guests with the best service in our warm boutique atmosphere but also in being a leader in environmental sustainability,” Megna said. “From recycling, to low-use water fixtures, to our own farm-to-table garden and citrus grove, sustainability is a part of the unique experience we offer our guests. This recognition is testament to our commitment to providing our guests the best hospitality in an environmentally friendly fashion.”

For more information about the program, visit GreenRiverside.com.