A native of Riverside, Mine Okubu was incarcerated in two internment camps during World War II. Entering a magazine contest with a drawing of a camp guard, she was discovered Fortune Magazine and offered a job in New York, leading to her release from camp. She lived in NY for 50 years, creating artwork that was exhibited around the world. The Mine Okubu Collection is the largest and most compete body of materials illustrating mid-century Japanese American history spanning the pre-war, wartime, and post war periods. As a social activist, writer and artist, her depiction of life in American internment camps gave voice to more than 120,000 Japanese American internees.

Built in 1929 as a movie theater, The Fox Performing Arts Center featured the first showing of Gone with the Wind in the 1930s.  Recently, the Fox underwent a multi-million-dollar renovation, turning it into a word-class performing arts venue and a leader among Southern California performing arts venues. Operated by national entertainment powerhouse Live Nation, the Fox regularly attracts the nation’s top performers, including bands, musicians, and comedians.

The Fox is located one block from the Mission Inn, Marriott and Hyatt Place, and two blocks from the Riverside Convention Center. 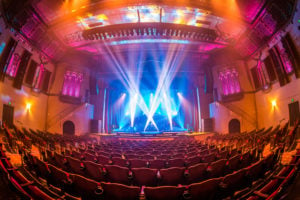